How to Fold a Band Saw Blade

If you’ve been working with the band saw for any length of time, you know that the blades can be quite large and cumbersome. They aren’t overly large as far as the width of the blade is concerned but the blades are round and the overall diameter is pretty extensive.

If you have to change blades for certain projects or you keep a variety of blades on hand for whatever reason, you know that storing those blades can be a complete mess. It’s best if you can learn how to fold them up and store them away.

How exactly do you fold a band saw blade? These blades can easily be as tall as an average person and have a good width to them as well. The good news is that they aren’t super difficult to fold if you just know the proper way to do so.

We recommend folding your blade from a standing position and in this guide, we will walk you through just exactly how to fold your blade step-by-step. We’ve got all of the tips to help you fold it and you will be amazed at just how simple it can be.

We know some people prefer a visual aid, so here is a great video tutorial from YouTube that you might find useful as well.

While for some it may seem like a no-brainer to coil up or fold your band saw blade, there are others who question why this would ever even be a thing. If you’ve ever seen an uncoiled band saw blade or simply tried to store one, you will understand right away!

Band saw blades are very unwieldy in size and design. You can’t just put them on a shelf to store them unless you fold them first. Folding up a band saw blade just makes storing it far easier and takes up a lot less space, particularly if your storage space is limited in any way.

If you’re looking at that band blade and wondering where to even start with the folding process, don’t panic! It’s far easier to fold up than it looks. It’s also perfectly safe to fold up your band saw blades and it won’t harm the blade in any way either.

Normally, as part of our guides, we would instruct you on the tools you need to complete the steps. In this case, you just need your hands and your band saw blade. Of course, you also should wear gloves in order to properly protect your hands from the blade as the blade may be sharp.

Folding a band saw blade is also known as coiling the blade so if you see that terminology, just know they mean the same thing.

Now, slip on those gloves and grab your blade and let’s walk through this process. It’s fairly simple, but we are going to take it one step at a time.

We Think You’ll Like: Scroll Saw vs Band Saw – Which One Should You Buy?

Be sure that you are wearing your protective gloves in order to protect your hand from the blade at this juncture. If you’re wondering just how much of the blade should be on the ground, you don’t want it to just be lying on the ground but you want a good amount of slack there.

In the next step, you need to be able to step on the blade so this may give you a good indicator of that.

As you’re holding the blade in a circular form in front of you, take one foot and gently place it on the part of the loop that is on the ground. You just need one foot and it will primarily be there to hold the blade in place.

Be sure that your foot is both holding the blade securely and touching the floor when you step. Where you place your foot might depend on your shoe so just be sure your shoe is firmly against both the blade and the floor.

Some would say 3 steps is enough but we want to be sure you understand the motions so we are going to break down each move of the folding process. For step 3, simply lower yourself and the top half of the blade, bending the blade into almost an oval now and holding it around knee level.

Here is where your movements may start getting tricky. However, if you follow these instructions, you shouldn’t have a problem!

In this step, imagine that you are beginning to fold the blade to form a blade taco, in a sense. As you move, hold your wrists level and start moving them towards each other while you also start folding downward like a taco.

In slow motion, the portion of the blade in your hands will be about half the width of the portion still on the ground.

Here, you can now cross your hands, which will bring the halves of the blade in your hands over each other and will cause the blade to start coiling. This is exactly what you want to happen!

You want the blade to start coiling here, so don’t try to stop it. It’s your job to simply guide the coiling. Even when the blades are coiling, you should keep your foot firmly in place on that piece on the ground.

When you’ve folded the full coil down to your foot, you can stack the coils together and pick up the blade.

The result is a nice, circular blade that is folded (or coiled) into a much smaller blade for storage!

We Think You’ll Like: Table Saw Vs. Band Saw

Coiling or folding your blade isn’t hard, the trickiest part is getting your motions down so you can allow the coiling to happen naturally as you move. We hope this guide is helpful for your needs and that your coiling and folding go smoothly from here on out. 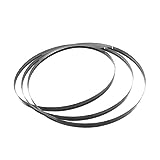